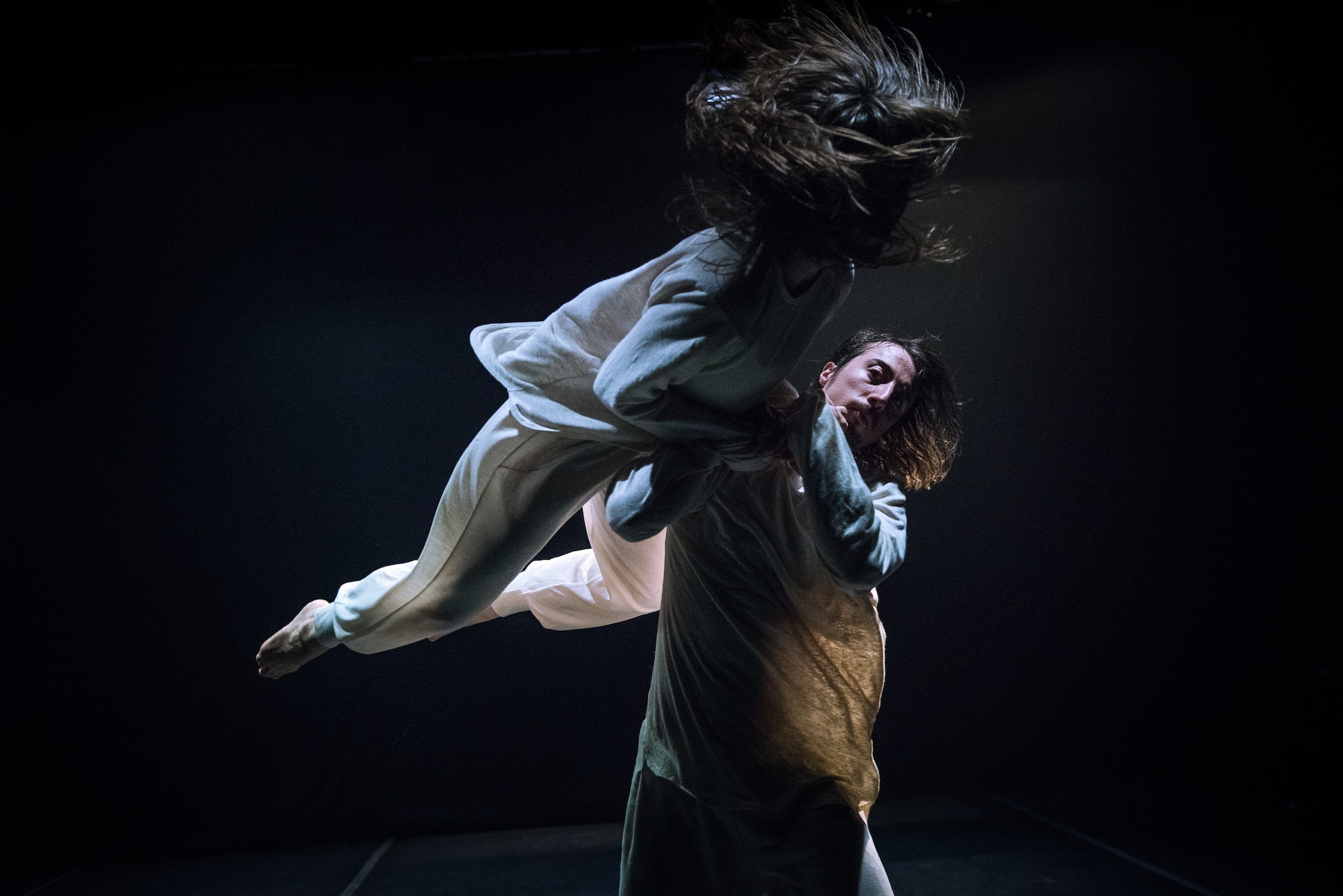 Debuting at RISING 2021 is RED, Dancenorth Australia’s desperate ode to a fragile planet. The production’s slowly contracting stage is an allegory for decreasing bio-diversity and illuminates the universal challenge of our survival: sustaining diverse and resilient social and biological ecosystems.

We sat down with the company’s creative leads on the work—Dancenorth Australia’s Artistic Director and Co-CEO Kyle Page, and its Associate Artistic Director Amber Haines—for a deep dive on the research and inspiration underpinning the urgent piece of dance.

RISING: What was the first spark of an idea for RED?

Kyle Page: About two-and-a-half years ago, Amber and I were having a conversation about the loss of species diversity across the planet. We then had this moment of acknowledgement that humans are just one of almost nine million species existing on this giant rock floating through space.

We started considering our relationship with all of those other species, life forms and natural processes—bacteria and protozoa, fungi, plants and animals at all levels of the food chain—and acknowledged our role as a part of that living system. We were curious about the fact that humans so often see themselves as distinct or separate to nature.

RISING: How have your personal lives sparked your interest in these ideas?

KP: Living in North Queensland, we are surrounded by an abundance of nature. We spend time out on the reef, where all of the research suggests there are huge numbers of declining populations; when we go snorkeling and diving, we witness first-hand the extent of coral bleaching. We have a number of friends and colleagues living and working up here as environmental scientists, and the stories that we’re being told, and the insights that are being shared, paint a pretty bleak picture.

RISING: RED takes the endangerment of the recessive gene for red hair as a base premise. Tell us about that.

KP: Well, it's very contentious. Red hair was created by a genetic mutation in northern Europe tens of thousands of years ago. When humans migrated out of Africa their skin lightened over time because they were exposed to less sun. The gene associated with red hair, (MC1R), had the beneficial effect of increasing the body’s ability to cope with sunlight, allowing redheads to efficiently generate vitamin D.

In 2007 there was an article in National Geographic which suggested redheads may become extinct due to global intermingling and the effects of climate change. It suggested that if climate change was to continue as predicted there would be more sunny days, less cloudy overcast weather and less requirement for this recessive gene to emerge. We also discovered that in 2011 Cryos International Sperm Bank, the largest sperm bank in the world, began turning redheads away due to lack of demand. The redhead extinction theory has since been disputed but it did spark an interest re the risk of extinction for humans more broadly.

More than ever Amber and I are viewing the human population as one entity, the global human population as one living being—that is the macro. Then there's the micro, that each single human body is an ecosystem, host to countless microorganisms, diverse communities with highly complex synergistic interactions within the body, microorganisms actually outnumber human cells by ten to one.

The fact is that human life on the planet, as one of the contributors to a global ecosystem, is indeed endangered and heavily affected by the shift in climate and rapid loss in biodiversity of which humans are, for the most part, the primary cause.

RISING: How does catastrophic climate change relate to the world of dance?

Amber Haines: We have augmented our environment essentially to satisfy a culture of comfort and convenience. There's unprecedented sedentarism in the world, technology is increasingly geared at removing movement for comfort and simplicity. And if you speak of that in ecological terms, there are vast environmental implications – from outsourcing labour, depleting natural resources and demolishing ecosystems in order to facilitate, drive and feed this continuous culture of ours.

I guess as artists that work with the body, movement is intrinsically a part of our world. I am very interested in the idea that the less you move, the more someone else moves for you, and not necessarily for their well-being or the planet's wellbeing.

RISING: That's a very interesting idea: the less you move, the more someone else moves for you. Can you tell us more about that?

AH: This amazing biomechanist Katy Bowman gives the simple analogy of a teabag. With a teabag, you've forfeited the movement of making a garden, planting the seed, growing the plants, harvesting the plants, processing the tea leaves, even fetching water to boil water, to even using a tea pot that you then have to wash. If you think of the labor and massive mono crop industrial agriculture base behind the making of that tea bag for your convenience, those sedentary concerns are also ecological ones.

RISING: So how did you translate these huge things and ideas into human movement, how does that choreography reflect those ideas?

AH: It starts with the two performers, James and Georgia, who are two of the most incredibly embodied humans I've ever known. They've devoted their entire lives to expanding their kinetic intelligence, as viscerally engaged and energetic performers. In a world increasingly dominated by the verbal intellectual it is increasingly rare to witness such refined and articulate bodies—movement and the physical aspects of our being are increasingly undervalued aspects of humanity.

RED is largely improvised within evolving structured parameters. Because they're navigating one another’s bodies and the shifting environment, it is a very live and dynamic system. It's incredibly hard, what they're pulling off, but it is really emulating a living organism that is responding to a multiplicity of information, forces and collaboration resulting in cellular development and evolution. This is happening live between them, that is the dance.

In the culture of dance, there are some very codified ways of moving and codified systems that, for me, emulate how Western culture looks at the world and looks at nature. It's all very segregated and refined and it needs to be quantifiable, repeatable, understandable; whereas this dance, the virtuosity really exists within the responsiveness of their bodies, the immediacy of their attention and presence with one another, Kyle and I are in awe of these two performers.

We're viewing aspects of nature through this sensorial intelligence and connection, these two embodied humans that are evolving together and problem-solving together until, literally, their environment interrupts the process.

RISING: So in RED, you explore ideas of constructing worlds or situations to make us comfortable. The set includes a large physical structure. Can you tell us about that?

AH: It is an eight by four by three metre inflatable dome made with transparent PVC. The floor is an inflatable dropstitch material with a density structure knitted through it, so it's solid. For much of the performance the structure has air circulating to keep it inflated. I don’t want to give a lot away, but at a certain point, we turn that off.

Our research into constructed spaces led us to a condition called floppy fin syndrome that affects Ocas in captivity. Orcas in captivity only swim in circles, often in only one direction and aren’t exposed to the pressure of oceanic depths so the mechanical environment is drastically different from their wild habitat.

Floppy fin syndrome is essentially a flaccid dorsal fin that can’t stand upright—the tissues of the fin are similar to human tissue, it has no bony structure so therefore is reliant on swimming in long straight lines with oceanic pressure at depth to remain healthy and upright. It only occurs to animals in captivity.

Modern humans have augmented their environment so much that we could be classified as living in captivity. Because evolution is such a slow process on a cellular level we are the same as we were tens of thousands of years ago but due to our increasingly augmented environment and unprecedented sedentarism we are denied the mechanical forces that enabled our ancestors to thrive. One interpretation is that the set is a metaphor for the augmented environments in which we live our lives.

RISING: Is there a hopeful outcome to the work?

KP: It's a really interesting thing for us to sit with this idea of hope. Hope and fear are both projections in opposing directions perhaps of the same continuum, but there's somewhere in the middle that clarity arises. I don't think anyone would deny the fact that the systems and ideas that have for a long time felt reliable, solid, are no longer working. We're curious whether they may need to dissolve in order to be re-imagined. Within that, people may find a sense of hope, but I guess we are more interested in providing a sense of clarity or reflection.

Throughout the development, we were continually reminded that the preciousness of life resides in the unassailable interconnection between all living beings. Life is an ongoing process, and despite our repeated reductionistic attempts, it cannot be separated into constituent parts nor made sense of in isolation. Humans exist somewhere within this complex ever-changing web, not at its centre as we so often believe.