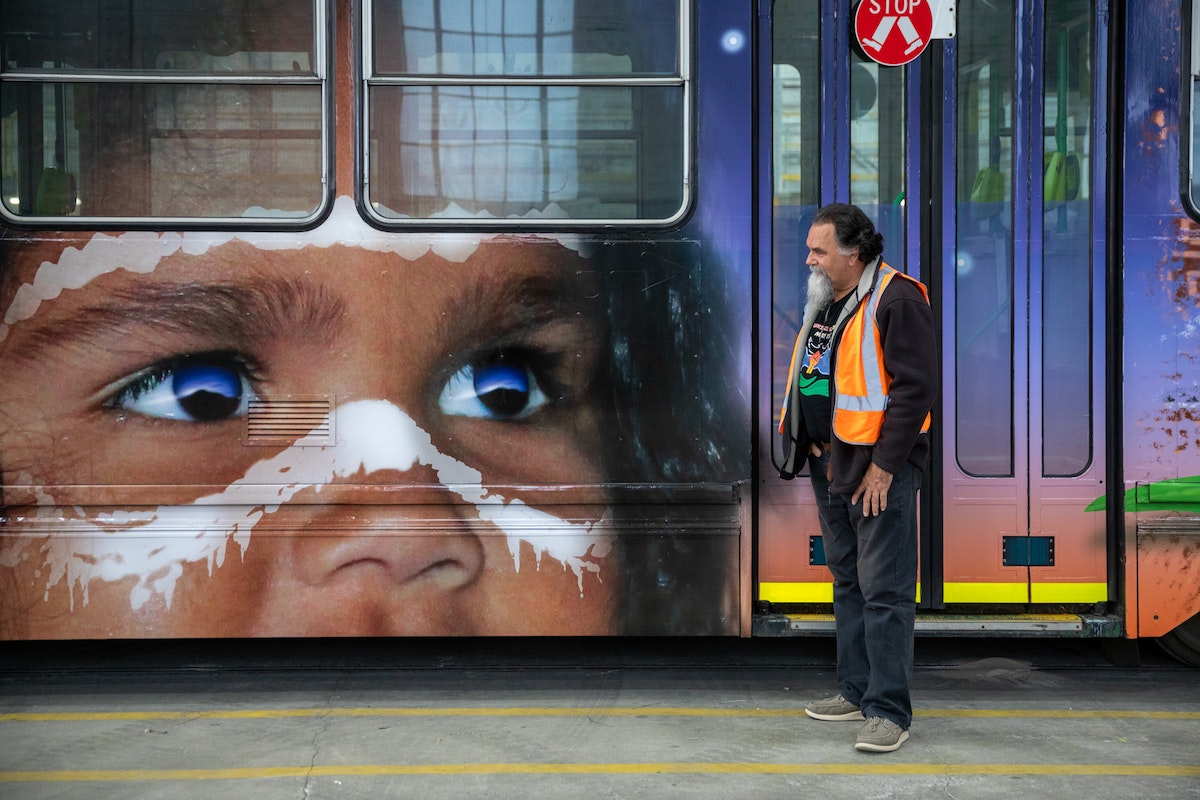 “Djeetgun, the female blue wren, is the wrukut (womens) totem of the Gunnai people of Gippsland. The Gunnai nation consist of five clan groups. My family are from the Brabrawooloong clan. Our country begins just east of Stratford and takes in the Mitchell, Nicholson and Tambo rivers and all their water tributaries. To the north we are locked by the mountains while our southern boundary ends around Paynesville and the lakes. The patterning in my design pays respect to my Ancestors. These markings have been inspired by the shields that were collected in the late 1800s by the squatters from the area at the time.”

"A number of these shields ended up in the Victorian Museum collection in Melbourne and eventually were returned to the community in the mid-1990s. This was a period when artefacts and cultural material were being repatriated after negotiations with the then government. They are now housed in the Krowathunkooloong Keeping Place in Bairnsdale, which I briefly managed between 1998—2000. The beautiful little Gunnai Lit (Child) is my granddaughter, Bryeesha. I christened her Djeetgun when I first laid eyes on her as a baby and she is affectionately called Djeetgun by the whole family to this day. The gums leaves represent the little bird Djeetgun as she flutters through the under growth and through the bush."

Ray Thomas was born in Melbourne in 1960 and is a highly acclaimed Victorian Aboriginal artist. He is mainly self-taught and was influenced by the award-winning artist, Lin Onus, who he met in the early 1970s. Since the mid-1980s Thomas has been researching his Gunnai people’s stories, histories and iconography, influenced by archives and historical cultural material held in museums and keeping places from his people. Thomas won the Deadly Art Award through the Victorian Aboriginal Art Awards in 2013 for a portrait of his mother, Alice and is a practicing mural artist. His work includes large murals at the Northcote Town Hall, the Victorian Aboriginal Health Service Preston and Fitzroy, and he is one of several mural artists behind the Aboriginal Advancement League Mural Wall on St Georges Road. Thomas has work in various collections including the National Gallery of Victoria, Melbourne Museum and Darebin City Council.

The place now known as Melbourne is a city built on the lands of the Kulin Nation peoples; Traditional Owners who continue to maintain deep connections to their country, kin and waterways that have existed for tens of thousands of years.

In 2021, for the first time, each Melbourne Art Tram has been designed by a First Peoples artist. As a collective of moving artworks all six share with us the strength and beauty of creative cultural expression and the interwoven connections and continuous cultures of First Peoples in Victoria. Below you'll find links to the work of each contributing artist, as well as further reading on the curation and selection process undertaken by RISING: